Published by Bloomberg Law
by Daniel R. Avery on August 23, 2022
Share This:

Goulston & Storrs M&A attorney Dan Avery is a nationally recognized expert on M&A deal point trends. In partnership with Bloomberg Law, Dan has developed a series of 25 articles looking at these trends, on a topic-by-topic basis, providing practical insight into where these trends are heading, and the relevant implications for M&A deal professionals

In addition to representations and warranties, M&A purchase agreements generally include indemnification provisions, pursuant to which any given party (indemnitor) agrees to defend, hold harmless, and indemnify the other party or parties (indemnitees) from specified claims or damages. These typically include claims arising from a breach of the indemnitor's representations and warranties or covenants set forth in the purchase agreement, or with respect to other specific matters.

Types of Baskets: The Deductible and the Tipping Basket

The representations and warranties of the target company, or selling stockholder(s), as applicable, are likely to be much more extensive than the typically limited representations and warranties of the buyer. Accordingly, the buyer is more likely than the seller to be the indemnitee and beneficiary of indemnity, and thus has an interest in keeping any limitations on indemnity to a minimum. The seller or indemnitor, of course, has the opposite interest: to limit the circumstances in which it will have indemnity liability to the buyer or any other indemnitee.

There are two main types of indemnity baskets. The first is a deductible basket, where any amount of losses up to a certain dollar amount fall within the basket and are never subject to indemnification, similar in application to the well-known consumer insurance deductible. The second is referred to as a “tipping,” “first dollar,” or “dollar one” basket. With this second type of basket, the indemnification coverage kicks in only once the specified level of damages is reached and exceeded; and for this “tipping” basket, the indemnification coverage kicks in for the entire amount of damages, not just the damages above the specified amount. A first dollar basket is, in effect, a deductible basket which disappears when the deductible level is exceeded.

As a tipping or first dollar basket, that provision could be worded as follows:

Relationship of Baskets to Other Indemnification Limitations

An indemnity basket, whether deductible or tipping, is one of several different tools by which sellers seek to limit their indemnification obligations in M&A transactions, including the following:

Use of qualifiers within the seller's representations and warranties, or other obligations, which are subject to indemnification will limit seller exposure. The more common of these qualifications relate to knowledge, materiality or material adverse effect, and dollar threshold levels.

Typically, a seller's indemnity obligations will be capped in aggregate amount; these caps are often subject to exceptions, often the same as those applicable to baskets, as noted above.

Sellers and buyers may agree to exclude certain types of damages from indemnity coverage, such as punitive or consequential damages.

The Parties’ Positions on Indemnity Baskets

A seller will usually argue in favor of an indemnity basket for the following reasons:

Every other year since 2005 the ABA has released its Private Target Mergers and Acquisitions Deal Points Studies (the ABA studies). The ABA studies examine purchase agreements of publicly available transactions involving private companies. These transactions range in size but are generally considered as within the “middle market” for M&A transactions; the transaction values of the 123 deals within the 2021 study ranged from $30 to $750 million.

Over the nine ABA studies (2005-2021), the level of indemnity baskets as a percentage of transaction value, whether as mean or median, has remained fairly consistent.

As to the specific type of basket, deductibles have become increasingly common, now seen in almost ¾ of transactions reviewed in the 2021 study, as shown below. 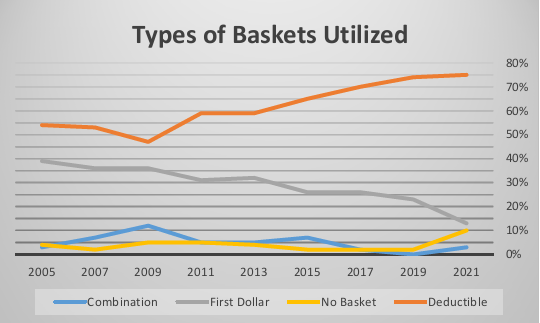 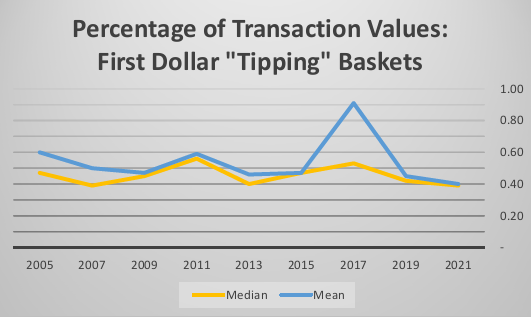 The Role of Representation and Warranty Insurance (RWI) in Indemnity Baskets

One of the biggest changes in private company M&A during the past decade has been the enormous growth of representation and warranty insurance (RWI). With RWI, buyers and sellers are able to allocate some of the post-closing M&A indemnity risk to third party insurers. RWI has gone from being a differentiator that aggressive buyers offered to a much more common feature of private M&A deals. As indemnity risk has been shifted through RWI from sellers to third party insurers, avenues for a buyer's indemnity recourse against sellers have narrowed. This includes through the lowering of indemnity caps and even the elimination of post-closing seller indemnity for representations and warranties, subject to narrow exceptions, such as in the event of fraud.

It is worth noting that relying on references to RWI in M&A transaction documents as evidence of RWI's usage is potentially imperfect. In the author's experience, sellers may insist that they have minimal involvement or connection with the RWI insurer or the RWI process, and that the buyer deal with indemnity risk wholly on its own, whether through RWI, self-insuring, or negotiations with the seller in the M&A documents. This approach is driven at least partly by the concern that if faced with claims, insurers may seek third party beneficiary, subrogation, privity or other means of recourse against the seller, notwithstanding language in the documents to the contrary, and the view that reducing any documentary connections with, or even references to, RWI could assist in a seller defense against such insurer claims.

In addition, where the seller, and not the buyer, is acquiring the RWI policy, one would expect there to be no need to reference the policy in the M&A documents, though those situations would likely not see an impact on seller indemnity caps or baskets. In other words, it is possible that some meaningful number of M&A deals with RWI have no references in the deal documents to the insurance policy itself.

The 2017, 2019, and 2021 ABA studies each show that indemnity caps were lower in reported deals where RWI was referenced in the deal documents, as compared with transactions without any such reference. 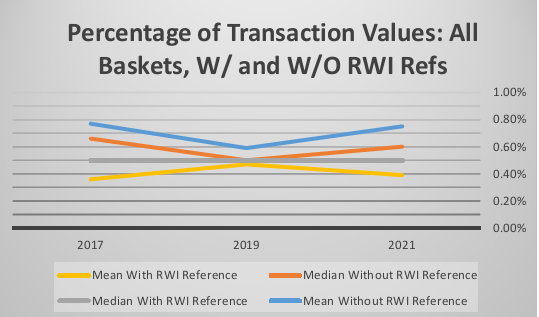 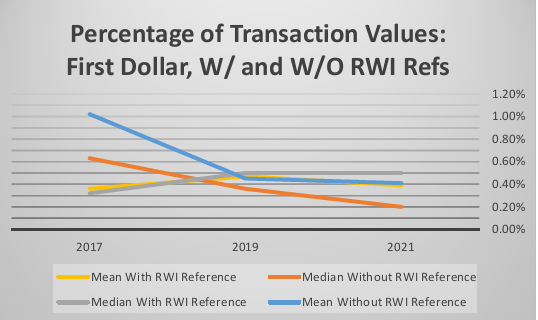 An indemnity basket, whether deductible or tipping, is one of several different tools by which a seller seeks to limit its indemnification obligations in M&A transactions. The indemnity basket is a true dollar matter for buyers and sellers— allocating financial responsibility for specified matters among buyer and seller, by dollar amount—and accordingly is an important component of an M&A purchase agreement. At the same time, the ABA studies show a consistency in practice as to indemnity baskets, and as such provide reliable benchmark data for parties seeking to implement customary or market approaches as to an indemnity basket.