Published by Bloomberg Law
by Daniel R. Avery on April 15, 2021
Share This:

Introduction
In M&A transactions, the definitive purchase agreement, whether it is an asset purchase agreement, stock purchase agreement, or merger agreement, typically contains representations, warranties, and covenants, along with related indemnification obligations. One common limitation to the parties’ indemnification obligations seeks to reduce the amount that the indemnified party may recover by the amount of any insurance proceeds that the indemnified party receives with respect to the matter giving rise to the indemnity claim, referred to herein as “insurance reduction provisions”. This article examines trends in the prevalence of insurance reduction provisions in private company M&A transactions.

Insurance Reduction Provisions Overview
The indemnification obligations under an M&A purchase agreement generally cover breaches of the representations, warranties, and covenants of the respective parties. However, the obligations may also extend to other matters on a standalone basis, regardless of whether such a breach has occurred. Examples of such extensions include seller indemnification for pre-closing taxes or for specific matters identified during legal due diligence.

Although a typical M&A agreement includes indemnification from seller to buyer and buyer to seller, the seller is typically the party who requests an insurance reduction provision. This is because the seller's representations, warranties, and covenants, and related indemnification obligations are normally broader in scope and substance than those of the buyer, making the seller more likely to be the indemnifying party. Accordingly, this article examines insurance reduction provisions based on the assumption that the seller is more inclined, and the buyer less inclined, to include such a provision in an M&A agreement.

Seller's View on Insurance Reduction Provisions
The seller's argument for including an insurance reduction provision typically focuses on fairness. For example, assume the buyer suffers losses of $100 regarding a matter that gives rise to a claim against the seller. The buyer submits a claim to its insurer for the losses suffered and the insurer pays the buyer $50 under the buyer's policy. The seller would argue that, under that scenario, the buyer's real damages are $50, not $100. Accordingly, to pay the buyer $100 would result in an unfair $50 windfall at the seller's expense.

Buyer's View on Insurance Reduction Provisions
As a practical matter, insurance reduction provisions are quite common. Buyers routinely, though not always, accept the provision with relatively little resistance. Instead, buyers often negotiate for provisions stating that the buyer is not required to actually submit claims to an insurer or that state that any reduction should be tied to insurance proceeds actually paid, not just those available under a policy. Sometimes buyers agree to use commercially reasonable efforts to pursue insurance claims so long as any claims do not result in a premium increase for its insurance policies or otherwise negatively changes the insurability of the buyer's activities, whether in terms of coverable risks or otherwise.

Another Argument?
A buyer may have credible arguments against the inclusion of insurance reduction provisions altogether, even if buyers rarely make such an argument. The crux of such an argument is why should the buyer's own risk mitigation strategies be of any relevance to the scope of the seller's indemnification obligation? For example, a buyer might argue that it is free to mitigate or insure against any particular risk as it sees fit, and the mitigation approach may be a combination of contractual indemnity from the seller and through insurance. As such, the buyer may decide to pay for insurance even if it has possible indemnification claims against the seller, so as to increase the number of potential parties against whom it may have recourse. Furthermore, the buyer has paid for the insurance itself and accepted the risk that the insurer may be unable or unwilling to pay claims.

Note in this regard that the buyer's argument might be more persuasive if it purchased the insurance itself, as opposed to having acquired seller-purchased insurance through a stock acquisition. Nonetheless, the buyer might still assert that in the stock sale, it purchased the insurance because the buyer's price for the transaction assumed that it would acquire the insurance without need to reduce claims of indemnification. In fairness, it's highly unlikely that buyers actually take the insurance reduction concept into account in pricing a transaction, but there is some logic to the argument on its face, even if it is unlikely to carry the day.

There are two potentially related concepts implicated with the buyer's argument. Both are complex topics beyond the scope of the article, and, not surprisingly, not often the topic of heavy discussion during M&A negotiations. First, many states bar double recovery. However, the concept of double recovery generally applies to plaintiffs asserting insurance claims against multiple insurers for the same event, or different claims against the same defendant. By contrast, the collateral source rule, a well-established U.S. legal doctrine, generally prohibits a defendant from introducing evidence that the plaintiff has received amounts relating to the event at issue from another source, such as an insurance company.

Second, concepts of subrogation might also be relevant. Subrogation is defined by Merriam-Webster as “the assumption by a third party (as a second creditor or an insurance company) of another's legal right to collect a debt or damages.” In the insurance context, this normally means that if an insurer pays its insured regarding an insured event, the insurer then steps into the shoes of the insured to pursue any rights of the insured against other third parties. Thus the issue here is whether an insurer, after payment of a claim to the buyer, would be able to pursue the related indemnity rights against the seller. The insurer's right to subrogation may depend upon the wording of the insurance contract and relevant state law.

Trends in Insurance Reduction Provisions
Every other year since 2005 the ABA has released its Private Target Mergers and Acquisitions Deal Point Studies (ABA studies). The ABA studies examine purchase agreements of publicly available transactions involving private companies. These transactions range in size but are generally considered as within the middle market for M&A transactions; the median transaction value within the 2019 study was $145 million. 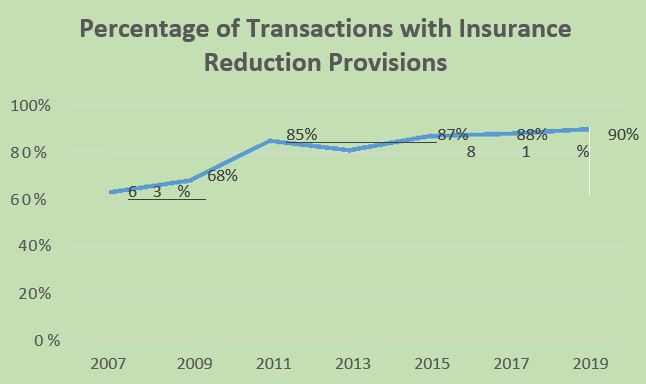 Conclusion
Insurance reduction provisions are increasingly and commonly included within M&A agreements, and are usually included with relatively little negotiation. Most of the negotiation relates not to whether limitation should be required, but rather whether it should be tied to insurance proceeds actually received, as opposed to simply being available, and whether the indemnitee should pursue recovery from its insurer before asserting an indemnity claim. Despite their inclusion becoming commonplace, there may be legitimate reasons, depending upon the overall dynamic of the transaction, for buyers to at least question whether an insurance reduction provision should be included in the M&A purchase agreement at all.