Published by Bloomberg Law
by Daniel R. Avery on March 15, 2021
Share This:

Compliance With Laws Representations
A typical, though buyer-friendly, compliance with laws representation may read as follows:

The Company is in compliance, and since _____  20__ has been in compliance, with all applicable laws, ordinances, codes, rules, requirements and regulations of foreign, federal, state and local governments and all agencies thereof relating to the operation of its business and the maintenance and operation of its properties and assets. No notices have been received by, and no claims have been filed against, the Company alleging a violation of any such laws, ordinances, codes, rules, requirements or regulations, and, to the knowledge of the Shareholders, the Company has not been subject to any adverse inspection, finding, investigation, penalty assessment, audit or other compliance or enforcement action. The Company has not made any bribes, kickback payments or other similar payments of cash or other consideration, including payments to customers or clients or employees of customers or clients for purposes of doing business with such Persons.

The compliance with laws representation is usually broad and does not focus on any specific aspect of non-compliance or any particular set of laws or regulations. Accordingly, it often covers the same ground as more topic-oriented representations which include legal compliance issues within a narrower context.

Negotiation of the compliance with laws representation, and related seller disclosures, can often help a buyer in its diligence of the target. Rushna Heneghan, deputy general counsel at Charles River Laboratories, said, when "we are looking at an acquisition target, the compliance with laws rep serves two purposes. It allocates responsibility as between buyer and seller for compliance issues, but it will also, hopefully, prompt a seller to raise any such issues or concerns during the disclosure process."

This is helpful because the buyer can then consider the disclosed information in assessing the overall risk profile of the target. "While the rep itself is important, I'd much rather know the underlying compliance problems than close the transaction with a strong indemnity claim for breach of the rep," Heneghan said.

Buyer and Seller Approaches
As reflected below, compliance with laws representations are seen in virtually every M&A deal. So, unlike many other components in an M&A purchase agreement, sellers generally do not argue against including such a representation. Instead, the negotiation between buyer and seller tends to focus on potential limitations to the representation, most notably along the following lines:

Trends in Compliance With Laws Reps
Every other year since 2005 the ABA has released its Private Target Mergers and Acquisitions Deal Point Studies. The ABA studies examine purchase agreements of publicly available transactions involving private companies. These transactions range in size but are generally considered as within the "middle market" for M&A transactions; the median transaction value within the 2019 study was $145 million.

The following graph shows these trends with more specificity. 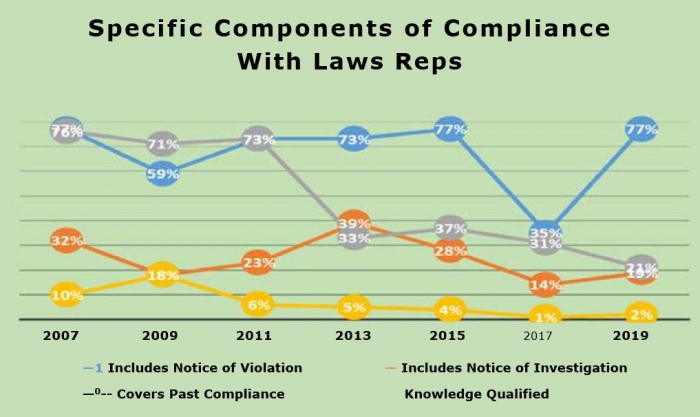 The use of knowledge qualifiers for these representations continues to be rare, appearing in only 1% and 2% of reviewed transactions in the past two studies. The inclusion of past compliance has become, over time, the minority approach, reflecting a decrease in usage from 76% in the 2007 ABA study to 21% in the 2019 ABA study. Additionally, over the last seven ABA studies, inclusion of notices of investigations has been more the exception rather than the rule. In contrast, including notices of violations continues to be a common practice (ranging from 59% and 77% in the five studies between 2007 and 2019, with the exception of a one-study drop to 35% in 2017).