Published by Bloomberg Law
by Daniel R. Avery on July 27, 2022
Share This:

The indemnification obligations under an M&A purchase agreement generally pertain to breaches of the representations, warranties, and covenants of the respective parties, but sometimes also apply to other legal or business matters on a standalone basis, regardless of whether such a breach has occurred. A typical M&A purchase agreement includes indemnification from the seller to the buyer, and vice versa.

However, because the seller's representations, warranties, and covenants, and related indemnification obligations, are normally broader in scope and substance than those of the buyer, it is usually the seller who seeks to include damage mitigation. This is because the seller is more likely to be the indemnifying party and therefore more interested in including provisions that reduce indemnification liability, even if the same limitations are applicable to the buyer as well. Accordingly, this article looks at damage mitigation provisions assuming that the seller is more inclined, and the buyer less inclined, to include such provision in the purchase agreement.

A typical indemnification provision may read:

The Seller agrees to and will defend and indemnify the Buyer Parties and save and hold each of them harmless against, and pay on behalf of or reimburse such Buyer Parties for, any Losses which any such Buyer Party may suffer, sustain or become subject to, as a result of, relating to or arising from: (i) any breach by the Seller of any representation or warranty made by the Seller in this Agreement; (ii) any breach of any covenant or agreement by the Seller under this Agreement, (iii) any Taxes of the Seller or its Affiliates; or (iv) the matters set forth on Schedule X.

Damages mitigation provisions may take different forms, including a provision drafted similar to the following:

Indemnitee shall be responsible for taking or causing to be taken all reasonable steps to mitigate its Losses upon and after becoming aware of any event that could reasonably be expected to give rise to Losses that may be indemnifiable under this Agreement.

The negotiation between the buyer and the seller generally focuses on whether the purchase agreement will include an express duty to mitigate or remain silent on the matter. Buyers generally do not ask for a provision that expressly states that the buyer has no duty to mitigate (and while undoubtedly such provisions have been negotiated, the author, in his experience, has not seen such a request).

Similarly, the ABA studies identify whether the reported transactions include an express duty to mitigate or are silent. They do not generally identify express exonerations of the duty (likely because such provisions rarely exist). This is not surprising given that there generally is a duty to mitigate damages under common law contract principles in the absence of an express contractual obligation to do so, as noted below.

It is a general principle of contract law in the U.S. that a party cannot recover damages for losses if those damages could have been reasonably mitigated or avoided. See, e.g., Restatement (Second) of Contracts § 350, cmt. b. (“As a general rule, a party cannot recover damages for loss that he could have avoided by reasonable efforts.... he is expected to take such affirmative steps as are appropriate in the circumstances to avoid loss by making substitute arrangements or otherwise”).

The reference to this as a “duty” is somewhat of a misnomer because the aggrieved party does not incur direct liability for failing to mitigate. Instead, otherwise recoverable losses are simply reduced by amounts that could have been avoided or ameliorated by those mitigation efforts. See also, 22 Am. Jur.2d Damages §355 (“[References to a ‘duty’] are inaccurate expressions of the doctrine of avoidable consequences, however, because, like other principles limiting recoverable damages, the failure to take reasonable action to limit damages does not create affirmative rights in anyone. The only result of such failure is that courts will not allow damages for consequences of an injury that they believe the plaintiff could reasonably have avoided”) (citations omitted).

If a duty to mitigate already exists under well-established contract principles, then why, as we will discuss below, do purchase agreements increasingly include damage mitigation provisions? In that context, aren't such provisions unnecessary?

The Issue Between Buyer and Seller

In the author's experience, there is often little negotiation on this topic even though, as reflected in the ABA studies discussed below, a majority of deals covered by the studies now include duties to mitigate. To many lawyers, the request to include a statement reflecting a buyer's duty to mitigate damages seems innocuous on its face; perhaps not strictly required as a contractual matter given the existing common law duty described above, but what is the harm?

For example, while the common law duty to mitigate simply states that a party cannot recover damages for loss if those damages could have been reasonably mitigated or avoided, a typical damage mitigation provision may obligate the buyer to take “all reasonable steps to mitigate its Losses upon and after becoming aware of any event that could reasonably be expected to give rise to Losses.”

The two duties are different, and arguably the contractual damage mitigation provision is more onerous than the common law duty, because it could be interpreted as creating a duty to act after the indemnified party becomes aware of an event that could reasonably be expected to give rise to damages. Essentially, the damage mitigation provision could be interpreted as creating an affirmative covenant on the part of the indemnitee that, if breached, could result in a direct claim by the indemnitor. This is inconsistent with the common law duty that, as discussed above, does not create an affirmative obligation or duty and for which no liability would attach for failing to act.

Of course, if the seller has enough bargaining power, there is no reason why that seller should not negotiate for a damage mitigation provision that imposes an affirmative mitigation duty that is specific to the transaction and more stringent than the common law duty. While that may seem straightforward, as a practical matter, the parties considering a contractual damage mitigation often are not seeking to create obligations materially different than the existing common law standard, though that may be the unintended result, for the reasons described above.

A seller may argue that this issue is similar to situations where the seller and the buyer agree to define “fraud” in the purchase agreement even though fraud has a common law meaning. However, the situations are not completely analogous because the common law duty to mitigate is well-established and reasonably clear while the definition of common law fraud is more difficult to define in a manner that adequately captures its meaning in all jurisdictions. See West, Glenn D., “That Pesky Little Thing Called Fraud: An Examination of Buyer's Insistence Upon (and Sellers’ Too Ready Acceptance of) Undefined ‘Fraud Carve-Outs’ in Acquisition Agreements,” 69 Bus. Law. 1049 (Aug. 2014). In addition, most definitions of fraud in purchase agreements are narrow in scope, focusing on whether the fraud is “intentional,” “actual,” “constructive” and do not attempt to create a universal definition that captures the common law meaning.

According to the ABA studies, damage mitigation provisions were included in 56% of the deals reported in the 2021 study. This level represents a slight dip to the upward trend witnessed over the previous seven ABA studies that showed inclusion jump from 22% in 2007 to 60% in 2019, as shown by the chart below. 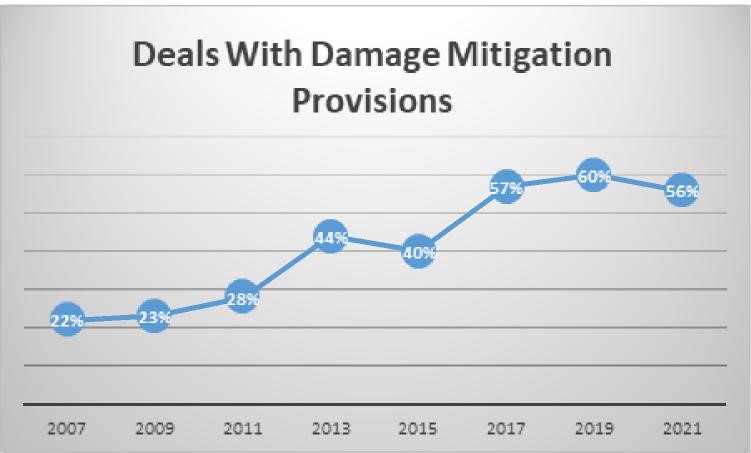 In almost all (95%) of the damage mitigation provisions reviewed in the past two ABA studies, the damage mitigation covenant was subject to qualification either by an “efforts standard” (e.g., that the covenant is tied to the damaged party's “commercially reasonable” or other specified efforts to mitigate) or “to the extent required by law.” The chart below shows these recent findings. 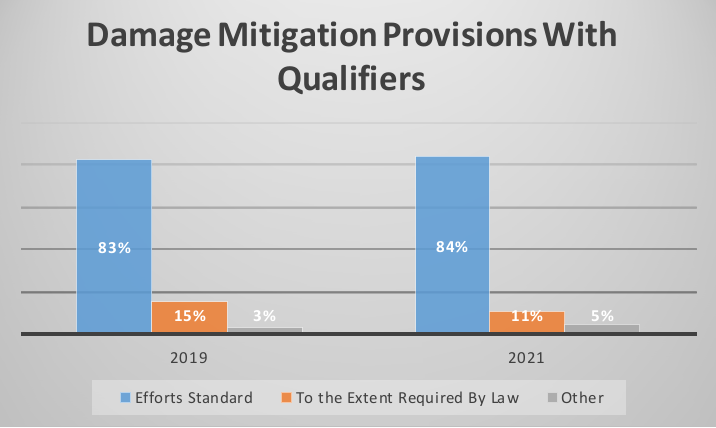 The use of damage mitigation provisions in purchase agreements has increased and, as of the 2017 study, became and has remained the majority approach. Counsel for sellers and buyers should understand and accept that the effect, even if not the purpose, of damage mitigation provisions, is to create an obligation that is likely different than the common law duty to mitigate (unless it simply incorporates or replicates the common law duty). There may be good and rational reasons for modifying the common law rules, but counsel for both sides should carefully assess the reason for and the impact of having two potentially different standards of mitigation applicable to indemnitees.