Published by Bloomberg Law
by Daniel R. Avery on April 21, 2021
Share This:

Introduction
In merger and acquisition (M&A) purchase agreements, whether asset purchase agreement, stock purchase agreement, or merger agreement, provisions addressing the purchase price, and how it is to be paid, are amongst the most critical to get right. The price to be paid to acquire the target can take many different forms, such as cash, securities of the buyer, other non-cash consideration, or a buyer note—whereby the seller finances some or all of the purchase price. Additionally, a portion of the purchase price may consist of contingent payments that are payable after closing, commonly referred to as an earnout. The typical earnout provision entitles the seller to receive further payments if the target, post-closing, meets prescribed benchmarks. These benchmarks are usually, but not always, financial based. This article examines trends in the use and structuring of earnout provisions in private company M&A transactions.

Characteristics of Earnout Provisions
Unlike many aspects of an M&A purchase agreement, which have become fairly standardized with well-established market parameters and drafting conventions, earnout provisions are highly fact-specific and often heavily negotiated. As such, there is no typical earnout provision. However, there are some basic considerations that factor into determining and negotiating an appropriate earnout provision.

The milestones which, if reached, trigger payment of an earnout need to be clearly set out in the purchase agreement. Often, these are financial milestones, such as reaching a certain EBITDA level during a prescribed period of time, but they can also be non-financial, such as procurement of a key government or regulatory approval or contract in the pipeline, or closing of a major strategic partnership. An issue related to achievement of milestones is whether the earnout should accelerate upon a change in control.

Because of the flexibility inherent under most accounting standards, such as generally accepted accounting principles (GAAP), when determining financial terms, the parties should be specific about how the milestones are measured. Additionally, if the benchmark is profit-based, the parties must determine which expenses are included in the profit calculation, particularly to ensure an appropriate allocation of the buyer's general and administrative expenses to the post-closing target business.

The parties must agree on the length of the earnout period. This includes determining whether there is a single earnout or multiple, staged earnout payments over time. The answers may well depend on the specific industry in question, taking into account seasonality and other aspects of potential volatility.

Control Over the Earnout Business

The seller will often want to maximize its control over decision-making that can impact the earnout. This level of control can run the spectrum, from full business control replicating the seller's pre-closing operations to providing the buyer input on specified decisions, such as hiring. The seller also usually asks the buyer for commitments to fund the earnout business properly or consistent with past practice, and even to take steps intended to maximize the ability to achieve the earnout benchmarks. The seller's rationale is that, in most cases, these commitments help align the interests of the seller and the buyer to achieve the benchmarks. Most buyers resist making these commitments. Although seller and buyer interests may well be aligned, the buyer, as the new owner of the business, usually wants the freedom to run the business as it sees fit. Further, the buyer may need to make decisions that are not ideal for achieving the earnout but may be best for the buyer's businesses as a whole. As discussed below, and as reflected in the ABA studies, buyers tend not to promise to operate the post-closing target business consistent with past practice or to take actions to maximize the earnout.

Depending upon the circumstances, the buyer may need to record the fair value of the earnout as of the closing date under GAAP. In addition, parties often use earnouts to retain selling shareholders as key employees for a time after closing. However, if the payments become linked to employment, such as if the earnout payments are not made if a seller shareholder ceases to be a target employee on the payment date, the payment may be considered compensation instead of purchase price, which can have tax impacts for both buyer and seller.

An earnout provision often is connected to the purchase agreement's indemnity, escrow, and related provisions. For example, the buyer often has a setoff right. A setoff right allows the buyer to reduce the amount of any earnout payment owed to the seller by the amount of any indemnity claim against the seller under the purchase agreement. A seller may well argue that an earnout is, in effect, a holdback, of a portion the purchase price and, therefore, the indemnity escrow should be decreased or eliminated accordingly. A buyer, in response, would be expected to point to the inherently contingent nature of the earnout — i.e., if it is not earned there is nothing to hold back or offset — and discount its buy-side value — relative to a traditional “sum certain” escrow or holdback — accordingly.

Views of Sellers and Buyers
Earnout provisions are so fact-specific and tailored to individual circumstances in a deal that, depending on the terms, either sellers or buyers may be for — or against — an earnout's inclusion. In other words, unlike many other provisions in purchase agreements, there is no set buyer or seller position in favor of or against an earnout.

Earnouts are often used to bridge pricing gaps between buyer and seller. For example, the seller wants $100 for its business, but the buyer is only willing to pay $75 at closing. However, the buyer is willing to pay an additional $25 after closing if certain post-closing milestones are met. All else being equal, the contingent nature of the earnout payment is not as favorable to the seller as cash at closing and the level of the buyer's control over the business during the earnout period may increase that concern. On the other hand, buyers often like earnouts because it puts off some purchase price risk. This position is particularly true if the target is an earlier stage company or has unproven products or business models.

Trends in Earnout Provisions
Every other year since 2005 the ABA has released its Private Target Mergers and Acquisitions Deal Point Studies (ABA studies). The ABA studies examine purchase agreements of publicly available transactions involving private companies. These transactions range in size but are generally considered as within the middle market for M&A transactions; the median transaction value within the 2019 study was $145 million.

Approximately 60%-70% of earnout provisions reviewed as part of the ABA studies used either EBITDA or revenue as the principal earnout metric. 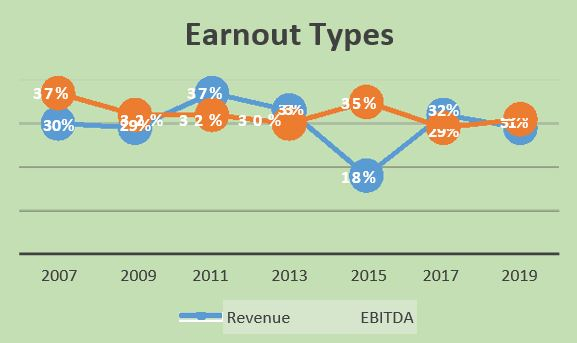 Buyers tend not to agree to operate the post-closing target business consistent with past practice or to take actions to maximize the earnout. These covenants are seen in 30% of less of reported transactions, as shown by the chart below. 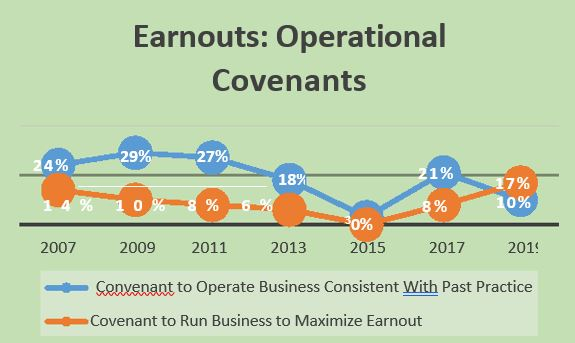 Further, under one-quarter of the reported earnouts expressly accelerated upon a change in control. 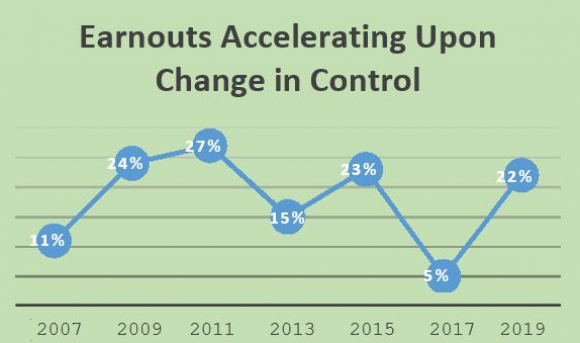 Lastly, more than one-half of earnouts in the ABA studies included an indemnity setoff right. 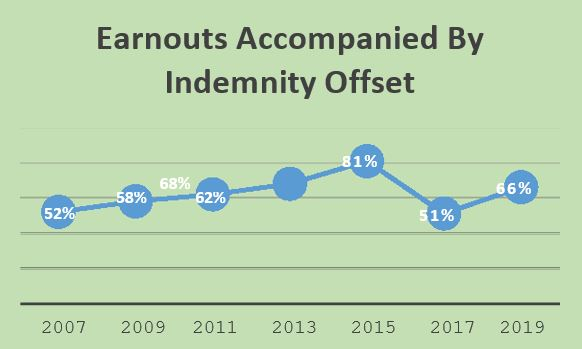 Conclusion
Earnout provisions are often heavily negotiated and fact-specific. As a result, their inclusion in M&A purchase agreements tends to be the exception rather than the rule. As a purchase price component, an earnout provision reflects real dollars to both the buyer and the seller. Thus, lawyers negotiating earnouts on behalf of their clients must pay careful attention to the various earnout issues and options.