Published by Bloomberg Law
by Daniel R. Avery on January 11, 2021
Share This:

Market Trends: What You Need to Know
According to the American Bar Association's Private Target Mergers and Acquisitions Deal Point Studies, financial statement representations are universally required from sellers in private company M&A deals, included in 100% of transactions covered by the most recent study in 2019. Prior ABA studies showed these representations included within 99% of reported transactions.

Every other year since 2005, the ABA has released its Private Target Mergers and Acquisitions Deal Point Studies. The ABA studies examine purchase agreements of publicly available transactions involving private companies. These transactions range in size but are generally considered as within the “middle market” for M&A transactions; the median transaction value within the 2019 study was $145 million.

Although financial statement representations are quite common, related concepts are often more intensely negotiated between buyer and seller, including:

GAAP Qualification. One common discussion point between buyer and seller is whether or not the representation should be GAAP-qualified.

These three concepts, discussed individually in more detail below, are often set forth in different representations and/or locations within the M&A purchase agreement. Further, the importance of and interrelationship among these concepts are not always fully appreciated, especially among entrepreneur owner-managers and other similar sellers who have never experienced a sale or recapitalization. But for many buyers, not all seller representations are of equal import: representations tied to seller financial statements are often considered among the most meaningful and significant to a buyer.

GAAP Qualification
Whether the fairly presents language in the financial statements representation should be GAAP-qualified often generates significant discussion between the parties. Including such a GAAP qualifier may provide more reliability of interpretation since, as noted above, the fairly presents standard has a meaning under GAAP. In addition, GAAP often allows for flexibility in how accounting determinations are made. Consequently, a fairly presents representation not qualified by GAAP creates uncertainty that may broaden the scope of a buyer's potential claims if the seller breaches the financial statement representation.

It is easier to highlight the distinction using the shorter example representations cited in the 2013 ABA study referencing the ABA Model Asset Purchase Agreement. This example, which is similar to the example above, includes a GAAP component but is not considered GAAP-qualified.

An example cited in the 2017 ABA study of a financial statement representation that is GAAP-qualified reads: 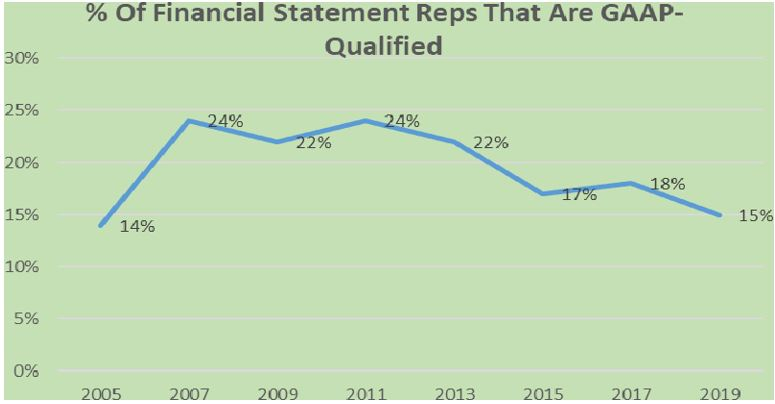 The books and records and other financial records of the Company, all of which have been made available to the Buyer, are complete and correct and represent actual, bona fide transactions and have been maintained in accordance with sound business practices.

On the other hand, the seller could counter that the financial statement representation should stand on its own and provide the buyer sufficient comfort while using an established fairly presents standard. In addition to the seller arguments against giving such a representation, private sellers, particularly smaller or closely-held companies, often have lapses in their record keeping and are simply unable to represent that its books and records are complete and correct.

Inventory. All of the Company's Inventory consists of a quantity and quality usable and salable in the Ordinary Course of Business, which is and will be merchantable and fit for its intended use, subject only to the reserves for Inventory writedowns or unmarketable, obsolete, defective or damaged Inventory reflected in the Latest Balance Sheet and the Closing Statement, both as determined in accordance with standard past practices of the Company. The Company has not sold, assigned, transferred, leased, licensed or otherwise encumbered any of its Inventory, except in the Ordinary Course of Business.

Fixed Assets. Schedule Y sets forth all of the Fixed Assets owned, leased or held by the Company, and sets forth, as to such Fixed Assets, the original purchase price and total accumulated depreciation. Each material Fixed Asset, and all Fixed Assets in the aggregate, are in reasonable operating condition, normal wear and tear excepted.

If the seller agrees to an accounts receivable representation, it often resists any statement guaranteeing the collectability of the company's receivables, although not included in the example above, buyers often ask for such a collections guarantee. A buyer may counter that the fairly presents standard of the financial statement representation is broad and unfocused as to any particular assets. Thus, at a minimum, the seller should give separate representations as to accounts receivable and inventory, because those assets, as current assets, are sufficiently.

In practice, sellers often get comfortable providing a fixed asset representation similar to the above, and separate accounts receivable and inventory representations are not uncommon, though inclusion of collectability guarantees within the receivables representation is more the exception than the rule.

Conclusion
Financial statement and related representations can be tricky for M&A lawyers because they involve an intersection between legal and accounting concepts. The facts and circumstances of a particular transaction will impact whether GAAP-qualifications, books and records representations, or balance sheet component representations are appropriate.