Indemnification as an Exclusive Remedy

Published by Bloomberg Law
by Daniel R. Avery on July 12, 2022
Share This:

Merger and acquisition purchase agreements generally include indemnification provisions, pursuant to which a given party (“indemnitor”) agrees to defend, hold harmless, and indemnify the other party or parties (“indemnitees”) from specified claims or damages. These typically include claims arising from a breach of the indemnitor's representations and warranties or covenants set forth in the purchase agreement, or with respect to other specific matters. Often the indemnification provisions are agreed to as between the parties as an exclusive remedy for asserting claims (also referred to as an “exclusivity of remedies” or “EOR” provision).

This article examines the use of EOR provisions in private company M&A transactions with reference to the ABA private target deal points studies.

As the name suggests, an EOR provision means that the right to indemnification provided under the M&A agreement is the parties’ exclusive remedy for any breach of the representations, warranties, covenants, agreements, and obligations in the M&A agreement. Further, depending upon the scope of the EOR provision, it may also extend to other documents related to the M&A transaction or as to the M&A transaction itself.

M&A indemnification provisions generally specify the rights of the parties regarding how claims are handled (e.g., timing, process, payment of claims, and limitations on liability). An EOR provision helps prevent plaintiffs from circumventing these carefully negotiated limitations by providing that the right of indemnification constitutes the only post-closing recourse available to either party and precludes the parties from seeking claims outside of the negotiated indemnification terms. As the studies show, EOR provisions are common in M&A purchase agreements, although they often include negotiated carve-outs that are usually narrow in scope.

A typical EOR provision may read:

The indemnification rights of the parties to indemnification under this Agreement are independent of, and in addition to, such rights and remedies as the parties may have at Law or in equity or otherwise for any misrepresentation, breach of warranty or failure to fulfill any covenant, agreement or obligation hereunder on the part of any party hereto, including the right to seek specific performance, rescission or restitution, none of which rights or remedies shall be affected or diminished hereby.

It is worth noting that enforceability of EOR provisions generally is a matter of state law—and is beyond the scope of this article. EOR provisions should not be assumed to be fully enforceable, and practitioners should examine the laws of the relevant jurisdiction—for example, courts may be loathe to enforce EOR provisions in circumstances involving “fraud” or other types of misrepresentations. See, e.g., ABRY Partners V, L.P. v. F&W Acquisition, 891 A.2d 1032 (Del. Ch. 2006); Livingston Livestock Exch. Inc. v. Hull State Bank, 14 S.W.3d 849 (Tex. App. 2000); Greenberg Traurig v. Moody, 161 S.W.3d 56, 77-79 (Tex. App. 2005) (applying New York law).

The Buyer's arguments for requesting a non-exclusive remedy provision (and resisting an EOR provision) may include:

EOR Provisions May Not Make the Buyer Whole. A buyer wants to preserve the flexibility to pursue claims of any type, whether based upon the indemnification provisions in the M&A agreement or otherwise. This could be important to the buyer because the remedies afforded to it under the indemnification provisions may be arguably inadequate given the potentially unique and unforeseen nature of harm that may be suffered. Put another way, a buyer may ask why it should waive remedies otherwise available to it under applicable law.

Fundamental Fairness. A buyer may also assert that a seller should not be permitted to immunize itself from certain tort or equitable claims premised on false representations of fact contained in the M&A agreement and that the parties acknowledge served as the factual basis on which they entered into the contract.

Preserve the Benefit of the Bargain. In the absence of an EOR provision, a buyer might do an “end-run” around the carefully negotiated indemnification terms and conditions by changing the legal classification of a claim and thereby vitiating (or at least rendering less meaningful) the purpose of the indemnification provisions (particularly the caps, baskets, time limits, and procedural restrictions). In other words, why spend all of the time and effort negotiating detailed indemnification provisions if a buyer can avoid them based on the legal characterization it decides to place on the claim?

Common Market Practices. The 2021 ABA study of private company M&A deal points observed that more than 97% of reported M&A purchase agreements included EOR provisions. This result was consistent with the previous ABA studies (2005-2019) in which EOR provisions were included in between 76% and 95% of reviewed deals.

Common EOR Exceptions. Because EOR provisions often include carve-outs for fraud, equitable remedies, and (to a lesser extent) intentional breaches and/or willful misconduct, the seller may claim that the buyer's arguments regarding an EOR provision unfairly capturing claims not properly within a purchase agreement's indemnification provision are misplaced.

Trends in Usage of EOR Provisions

Over the nine ABA studies (2005-2021), the inclusion of EOR provisions ranged from 76% to 97% of the reported agreements, with the last six studies all observing values in excess of 90%. Thus, not only are parties increasingly including EOR provisions in M&A purchase agreements, but the provision has become commonplace.

On the other hand, during the same time period, reported agreements including a provision making indemnification a non-exclusive remedy ranged from 2% to 13%, with the last six studies all seeing values of 1% or 2%. Some agreements reviewed in the ABA studies remained silent on the topic of exclusivity, with silence observed in between 1% and 14% of agreements.

The charts below show the trend with respect to EOR provisions.

As discussed above, it is common for the parties to agree to carve-out certain exceptions to EOR provisions. According to the ABA studies, “fraud” is a common carve-out to EOR provisions, present in over 80% of the agreements reviewed in eight of the nine studies. In deals that included a fraud carve-out, there is a steady trend to define fraud with some specificity. According to the ABA studies, commonly used definitions for fraud were “actual fraud,” “intentional fraud,” “actual knowledge of breach when made,” “express intention to deceive,” and “common law fraud.”

Other carve-outs from EOR provisions are for “intentional misrepresentations,” seen in 43% of deals in the 2017 study before dipping to 20% in the 2019 study and further to 16% in the current 2021 study, and “equitable remedies,” which were present in 91% of the agreements reviewed in the 2021 study. Exclusions for “breaches of covenants” have been present in a relatively small percentage of the agreements reviewed and seemingly on the decline (down from 18% in 2005 to 9% in 2019 to 1% in 2021). 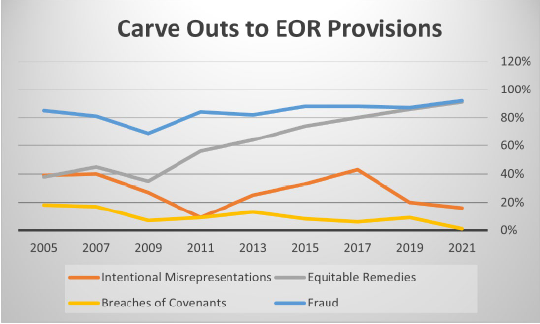 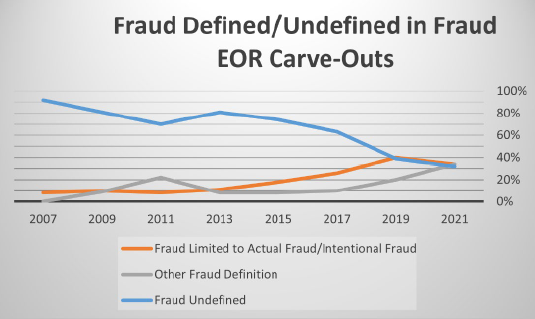 EOR provisions have been and continue to be commonly used in M&A purchase agreements. At the same time, carving out fraud and equitable remedies as exceptions to an EOR provision are fairly common. Additionally, the ABA studies show that parties are increasingly defining the term fraud when it is included as a carve-out.

Although the inclusion of an EOR provision can provide certainty to a seller, it may constitute a waiver of claims otherwise available to a buyer. Accordingly, the negotiated exceptions to an EOR provision are critical and counsel on both sides should consider these issues carefully when negotiating an M&A purchase agreement.