An indemnity “basket” and “cap” may be reflected in language such as the following:

The Parties Positions on Indemnity Caps
Because the representations and warranties of the target company (or selling stockholder(s), as applicable) are likely to be much more extensive than the typically limited representations and warranties of the buyer, the buyer is more likely than the seller to be the indemnitee and beneficiary of indemnity, and thus has an interest in keeping any limitations on indemnity to a minimum. The seller/indemnitor, of course, has the opposite interest: to limit the circumstances in which it will have indemnity liability to the buyer or any other indemnitee.

An indemnity cap is one typical limitation on indemnity liability in private company M&A transactions. While a cap is commonplace in M&A agreements, so are exceptions to the cap (i.e., situations where the cap on indemnity does not apply). The most common exceptions to an indemnity cap relate to the indemnitor's breaches of its most critical, or “fundamental” representations or of its covenants or agreements. The former exception recognizes that as to those subject areas which are critical to the overall risk allocation between the buyer and seller, the seller/indemnitor should “stand behind” its representations and warranties without limitation. The best example relates to title to the assets or equity being acquired. A buyer will argue, not unreasonably, that if the seller's representations as to ownership of the assets or equity being acquired are untrue, the seller should have full liability for any damages the buyer incurs due to defects in title. The latter exception – as to covenants – is based on the understanding that whether or not a party's covenants are breached is fully within the control of that party. Thus, the breaching party should not be permitted to use the indemnity cap as a shield but, instead, should be required to perform its obligations as stipulated in the agreement. One common example is the seller's non-competition covenants, whereby the seller agrees not to compete, following the closing, with the business being sold. From the buyer's perspective, the seller should be forced to comply with its agreement not to compete, and should not have an option to compete “liability free” above an indemnity cap.

Trends in Indemnity Caps
Every other year since 2005 the ABA has released its Private Target Mergers and Acquisitions Deal Point Studies (the “ABA studies”). The ABA studies examine purchase agreements of publicly available transactions involving private companies. These transactions range in size but are generally considered as within the “middle market” for M&A transactions; the median transaction value within the 2019 study was $145 million.

Over the eight ABA studies (2005-2019), indemnity caps have declined as a percentage of transaction value (whether as mean or median). This decline has been fairly consistent over the period of the ABA studies despite an uptick in the mean of indemnity caps following the financial recession of 2008 that was almost certainly the result of the private company M&A market being “buyer friendly” during this time period.

For reference, the mean represents the average of all of the covered data, and the median represents the data point separating the lower and higher halves of the overall data (i.e., one-half of all data points are above and one-half are below the median). Median is often considered a more reliable indicator of what is “normal or typical” where data distribution is skewed. 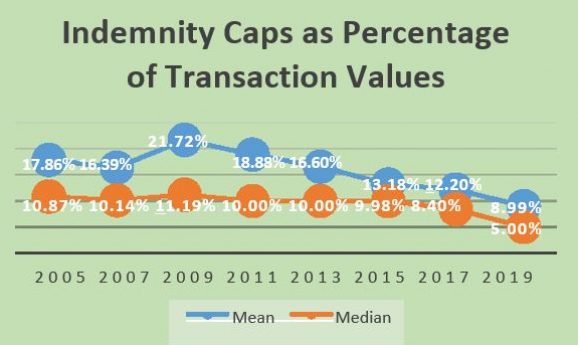 The Role of Representation and Warranty Insurance (RWI) in Indemnity Caps
One of the biggest changes in private company M&A during the past decade has been the enormous growth of representation and warranty insurance (“RWI”). With RWI, buyers and sellers are able to allocate some of the post-closing M&A indemnity risk to third party insurers. RWI has gone from being a differentiator that aggressive buyers offered to a much more common feature of private M&A deals. As indemnity risk has been shifted through RWI from sellers to third party insurers, avenues for a buyer's indemnity recourse against sellers have narrowed, including through the lowering of indemnity caps and even the elimination of post-closing seller indemnity for representations and warranties (subject to narrow exceptions, such as in the event of fraud).

It is worth noting that relying on references to RWI in M&A transaction documents as evidence of RWI's usage is potentially imperfect. In the author's experience, sellers may insist that they have minimal involvement or “connection” with the RWI insurer or the RWI process, and that the buyer deal with indemnity risk wholly on its own, whether through RWI, self-insuring, and/or negotiations with the seller in the M&A documents. This approach is driven at least partly by the concern that if faced with claims, insurers may seek third party beneficiary, subrogation, privity or other means of recourse against the seller (notwithstanding language in the documents to the contrary), and the view that reducing any documentary connections with, or even references to, RWI could assist in a seller defense against such insurer claims. In addition, where the seller, and not the buyer, is acquiring the RWI policy, one would expect there to be no need to reference the policy in the M&A documents (though those situations would likely not see a reduction in seller indemnity caps). In other words, it is possible that some meaningful number of M&A deals with RWI have no references in the deal documents to the insurance policy itself.

As shown in the charts below, the 2017 and 2019 ABA studies each showed that indemnity caps were lower in reported deals where RWI was referenced in the deal documents, as compared with transactions without any such reference.

Conclusion
Indemnity caps are often one of the most intensely negotiated provisions of an M&A purchase agreement. The market amount for indemnity caps has historically been a direct reflection of the relative strength of buyers and sellers in the private company M&A market. Most recently, however, the growth of RWI has had a dramatic impact in lowering indemnity caps, and this trend is expected to continue and stabilize.