Published by Bloomberg Law
by Daniel R. Avery on June 3, 2021
Share This:

Introduction
Merger and acquisition ("M&A") purchase agreements generally include indemnification provisions, pursuant to which any given party ("indemnitor") agrees to defend, hold harmless, and indemnify the other party or parties ("indemnitees") from specified claims or damages. These typically include claims arising from a breach of the indemnitor's representations and warranties or covenants set forth in the purchase agreement, or with respect to other specific matters.

In most M&A transactions, a portion of the purchase price otherwise payable to the seller is placed into escrow, for a defined period of time, to secure one or more indemnity obligations of the seller to the buyer following closing. This article examines trends relating to the use of indemnity escrows in private company M&A transactions.

M&A Indemnity Escrows
Indemnity escrows are typically set up as security for the seller's general indemnity obligations regarding its representations and warranties, but they need not be limited to those obligations. Typically, these escrows are held by a third party independent of the buyer and seller, such as a bank. Occasionally, the buyer may retain the escrow as a holdback, but this is less common. In this article the term escrow is intended to include buyer holdbacks as well as true third party escrows, since the difference between the two relates primarily to whether the funds are held by an independent party or not.

The parties may agree to establish a single escrow to secure all potential claims, or establish multiple, separate escrows with each providing recourse for different seller obligations. For example, if the buyer discovers something in diligence that warrants negotiation of enhanced rights and remedies, it may also negotiate for a separate escrow, apart from the standard general indemnity escrow, to ensure funds are available if any of the enhanced remedies are triggered. In addition, buyers and sellers are increasingly establishing separate escrows to secure buyer obligations arising as part of the purchase agreement's post-closing purchase price adjustment.

A general indemnity escrow may, but does not necessarily need to, tie to different dollar-based and timing aspects of the underlying indemnity to which it relates. For example, it may make sense to set the term of the escrow to the normal survival period of the seller's representations and warranties. Although, because there are often exceptions to that survival period, including for specified fundamental representations, there is not necessarily a perfect alignment between the two time periods. The parties might agree that the escrow should be the sole recourse for indemnity claims, and as such operate as an indemnity cap. But, as in the case of survival periods, likely exceptions to a normal cap, whether for claims arising from breaches of fundamental reps, covenants or the like, may weaken the case for perfect symmetry between escrow amount and cap.

Trends in Indemnity Escrows
Every other year since 2005 the ABA has released its Private Target Mergers and Acquisitions Deal Point Studies (the "ABA studies"). The ABA studies examine purchase agreements of publicly available transactions involving private companies. These transactions range in size but are generally considered as within the middle market for M&A transactions; the median transaction value within the 2019 study was $145 million.

For reference, the mean represents the average of all the covered data, and the median represents the data points separating the lower and higher halves of the overall data, i.e., one-half of all data points are above and one-half are below the median. Median is often considered a more reliable indicator of what is normal or typical where data distribution is skewed.

The following charts show how indemnity escrows have been covered within private company M&A agreements. 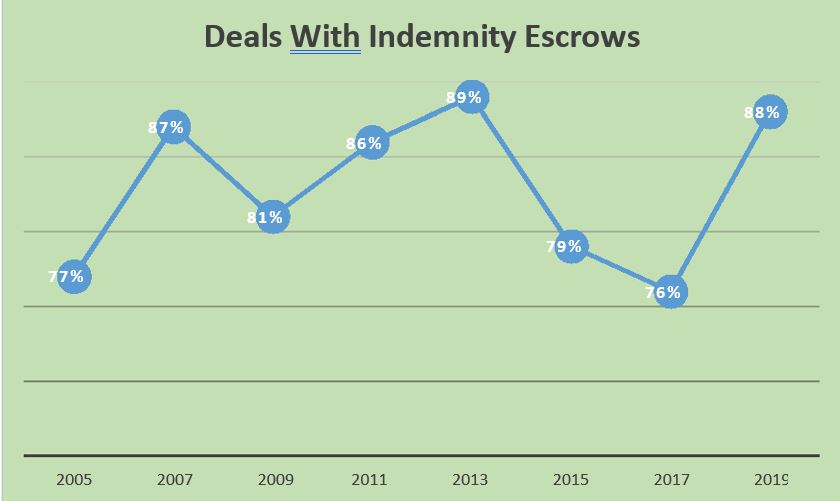 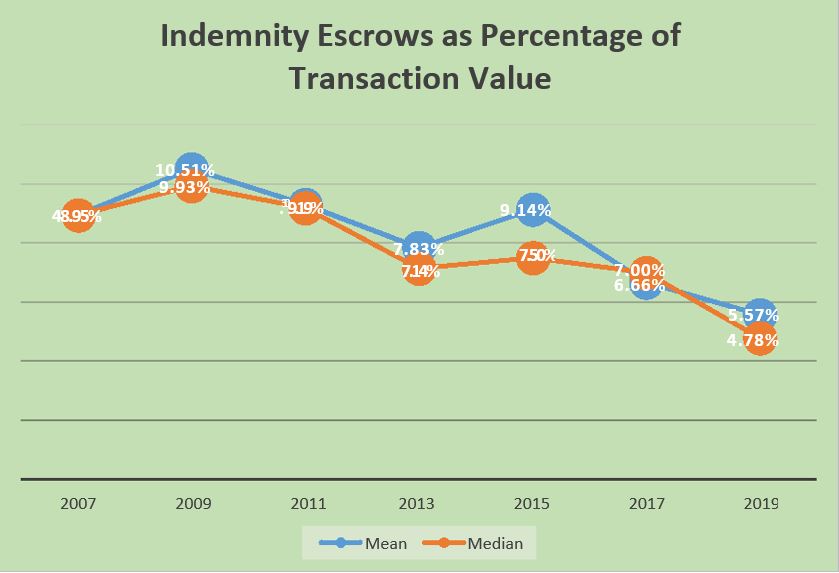 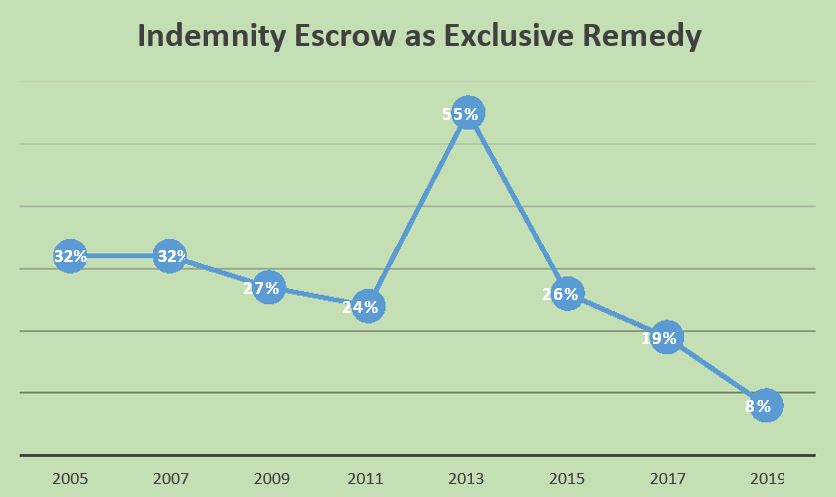