Non-Reliance and NOR Provisions

Published by Bloomberg Law
by Daniel R. Avery on March 29, 2021
Share This:

One common concern of a seller is ensuring that its statements outside the four corners of the agreement—e.g., written statements in a marketing document prepared in connection with the transaction or verbal statements of company management made in meetings with the buyer—are not treated as actionable representations.

Express Non-Reliance Provisions
The following is an example of a typical non-reliance provision (from the 2015 ABA study):

Acknowledgement. The Buyer acknowledges that, except for the representations and warranties contained in Article V and Article VI, none of the Sellers nor any Company nor any of their respective directors, managers, officers, employees, Affiliates, controlling persons, agents, advisors or representatives, makes or shall be deemed to have made any representation or warranty, either express or implied, in connection with the transactions contemplated hereby, including as to the accuracy and/or completeness of any information (including, without limitation, any estimates, projections, forecasts or other forward-looking information) provided or otherwise made available to the Buyer or any of its directors, managers, officers, employees, Affiliates, controlling persons, agents, advisors or representatives (including, without limitation, in any virtual data room management presentations, information or offering memorandum, supplemental information or other materials or information with respect to any of the above), that the sole representations or warranties being made by the Sellers or any Company with respect to the transactions contemplated hereby are set forth in said Articles V and VI, and that the Buyer is not relying on any statements, information or data other than the representations or warranties in said Articles V and VI in its determination to effect such transactions. With respect to any estimate, projection or forecast delivered by or on behalf of the Sellers or any Company, the Buyer acknowledges that: (i) there are uncertainties inherent in attempting to make such estimates, projections and forecasts; (ii) the Buyer is aware that actual results may differ materially; and (iii) the Buyer shall have no claim against the Sellers with respect to any such estimate, projection or forecast.

Increasingly, and as shown by the ABA studies discussed below, M&A practitioners are carving out fraud as an exception to non-reliance, and NOR provisions.

Related Provisions
Express non-reliance provisions are related, at least in part, to three other common components of an M&A purchase agreement:

Sandbagging Provisions. An “anti-sandbagging” provision precludes a buyer from bringing a claim for a breach of representation following the closing if the buyer knew of the breach—or the facts triggering the breach—as of closing. A “pro-sandbagging” clause expressly permits the buyer to pursue such a claim notwithstanding any knowledge.

Exclusivity of Remedies Provision. This clause states that the indemnification provisions in the purchase agreement constitute the sole remedy of the parties to bring claims relating to the transaction, subject to limited exceptions, such as for fraud.

Trends in Express Non-Reliance and NOR Provisions
Every other year since 2005, the ABA has released its Private Target Mergers and Acquisitions Deal Point Studies. The ABA studies examine purchase agreements of publicly available transactions involving private companies. These transactions range in size but are generally considered as within the “middle market” for M&A transactions; the median transaction value within the 2019 study was $145 million.

The last six ABA studies illustrate that express non-reliance provisions are increasingly common, tripling in prevalence during that period, and, as of the 2017 study, are the majority approach. 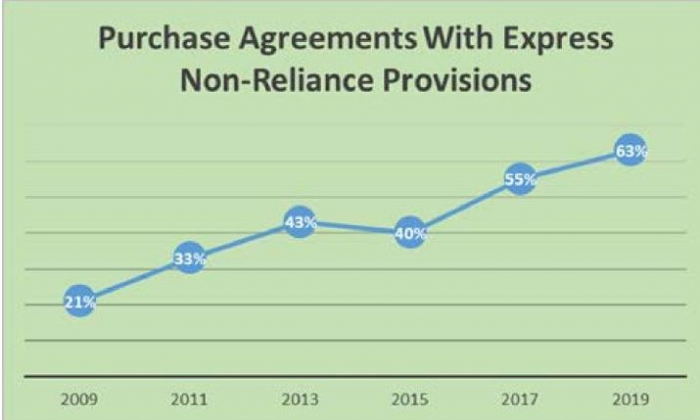 The 2019 ABA study published findings on fraud carve-outs in non-reliance provisions, for the most recent three studies, showing a steady and pronounced increase in these carve-outs since 2015. 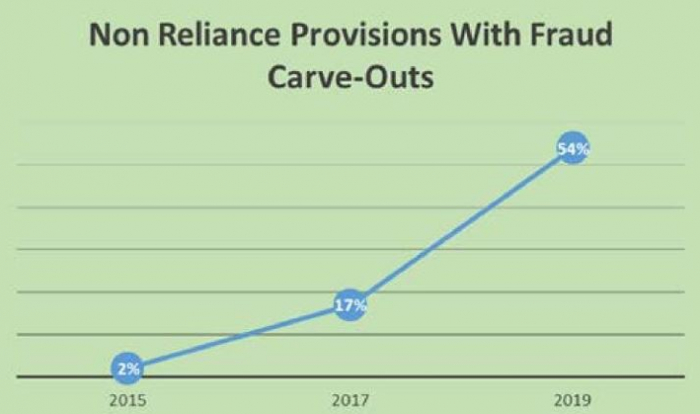