Published by Bloomberg Law
by Daniel R. Avery on November 16, 2020
Share This:

According to a 2019 ABA study on U.S. private company deal terms, only 3% of the reported deals included the delivery of a target counsel legal opinion as a closing condition. This marks the continuation of a sharp decline in the requirement for target counsel legal opinions evidenced in ABA prior studies—dropping from 73% in 2005. M&A lawyers are generally slow to change their ways, making this decline a striking one when compared to other deal points, many of which are either holding steady, showing fluctuation with no apparent trend, or are trending at a slower pace.

Over this 14-year period, in the M&A world, the combination of: narrower scope and broader exceptions and carve outs in transactional legal opinions; the expense involved; and more recently, the proliferation of representation and warranty insurance, has yielded a broad consensus that absent special circumstances, target legal opinions no longer satisfy a basic cost-benefit analysis.

Third-party legal opinions are more common in certain types of transactions than others. For example, in financial transactions, such as bank financings, these formal opinions are still quite common. Historically, opinions were similarly required from target company counsel in private company M&A transactions. However, over the past 15 years or so, these legal opinions have decreased in usage, to the point that they are rarely requested, absent unique and special circumstances, in private company M&A. The typical scope of these opinions is discussed below.

Common Scope of Target Counsel Legal Opinions
Third-party legal opinions do not come without significant legal time and resulting expense. Opining lawyers work hard to negotiate a legal opinion with stated limitations to minimize the possibility of a claim against the opining law firm. These limitations may include keeping substantive statements as narrow as possible, relying on certifications and other statements by the client and others, defining and limiting the materials reviewed, and stating exceptions and exclusions broadly. In addition, the opining law firm invests a significant amount of time reviewing all of the materials underlying an opinion, and many firms require multiple-partner or opinion committee review and approval of any written opinion letters.

Theoretically, a buyer could request that any particular matter be addressed in a target counsel opinion. As a practical matter, however, there are fairly well-established customs and practices for these opinions, including the required topics, specific language used, documents reviewed, and customary qualifiers, exceptions, and assumptions. In recent years, the scope of “customary practice” has been the subject of resources developed by leading practitioners and professional organizations such as the American Bar Association. Further, some of these organizations have developed and published proposed “model” opinions, which have gained varying degrees of acceptance.

In a private M&A transaction, a target counsel legal opinion is most appropriate for legal issues best assessed, or easily verified, by target counsel. For example, because target's counsel is typically involved in preparing the necessary shareholder and director votes and resolutions approving the transaction (and in determining whether related by-law or other provisions regarding quorum, meeting notices, etc., have been followed) that counsel is in the best position to opine that the transaction has been duly authorized. See A.B.A, Model Asset Purchase Agreement (Model APA), Ex. 7.4(a) Opinion of Counsel to Seller (2001).

Apart from these more general transaction-specific matters, a buyer may, depending upon the circumstances, require an opinion to cover additional specific issues, including as to patents, tax, and litigation generally—i.e., beyond claims relating to the transaction itself. Target counsel legal opinions typically do not cover matters that the target's counsel cannot reasonably verify—such as issues impacted by the legal status or actions of the buyer—or purely factual matters or issues.

Some buyers believe that a target counsel opinion can serve as a backstop or insurance for its own diligence lapses or for the target's own representations and warranties as to the matters covered in the opinion. However, using a third-party opinion as a backstop to due diligence may be of limited utility because opinion letters are typically much more narrow in scope than the corresponding target representations and warranties.

Moreover, while lawyers can be held responsible for intentional misconduct, recklessness, or negligence, they usually cannot be held liable “merely for being wrong”—as opposed to a target's liability for breach of representation or warranty, where simply “being wrong” may suffice to generate a claim even if absent intent, recklessness or other misconduct.

Trends in Target Company Legal Opinions
Every other year since 2005, the American Bar Association has released studies examining publicly available purchase agreements of transactions involving private companies. These transactions range in size but are generally considered as within the “middle market” for M&A transactions; the median transaction value within the 2019 study was $145 million.

According to the 2019 ABA study, only 3% of the agreements included the delivery of a target counsel legal opinion as a closing condition.

This continues a sharp decline in the requirement for target counsel legal opinions evidenced in prior studies—dropping from 73% in 2005. The chart below reflects this significant shift in deal practice with respect to target legal opinions. 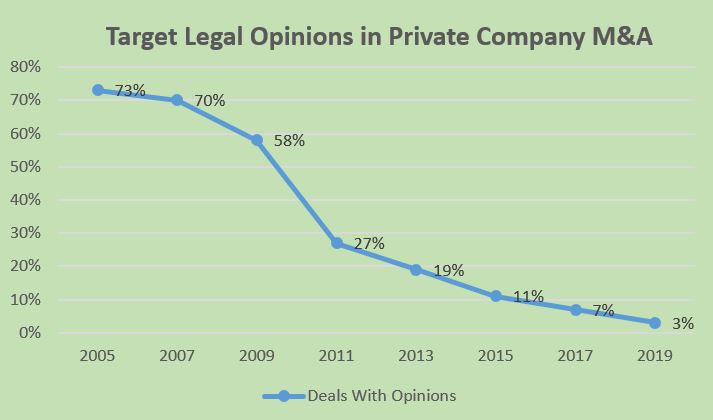 Why the Trend?
The ABA studies report how deal points are being resolved in M&A documents, but they do not explain why some deal points may evolve over time. At present, there is no way to extrapolate from the studies the many considerations that go into the decision-making with respect to any given M&A deal point. However, it appears that M&A lawyers and their clients are concluding on an increasing basis that the benefits of a target counsel legal opinion simply do not outweigh the costs, both in time and expense.

The following factors may be influencing the cost-benefit analysis as to target counsel legal opinions:

This does not mean that third-party legal opinions are always inappropriate or useless. There may be circumstances where such an opinion is warranted and of real benefit to the buyer. For example, if the target has no prior experience in M&A transactions—e.g., a family business being sold by the family members—but has competent, long-standing counsel, the buyer understandably may want the additional comfort that a target counsel legal opinion may offer, recognizing that experienced opining counsel would likely apply a rigorous diligence standard to the statements within their opinion.

The same reasoning may apply if the buyer has general concerns as to the overall quality of the target's information produced in response to the buyer's due diligence inquiries. Notwithstanding that target counsel legal opinions are seen less and less in M&A transactions, buyers are certainly not “bound” by market practices and may still see the value in such an opinion as a closing deliverable, whether because of specific facts or diligence concerns, a risk-averse outlook, or otherwise.