Published by Bloomberg Law
by Daniel R. Avery on November 12, 2020
Share This:

Market Trends: What You Need to Know
Over the past almost 15 years covered by the ABA studies, materiality scrapes have morphed from being a somewhat uncommon provision, seen in about 14% of transactions in 2005, to something near-ubiquitous in M&A purchase agreements, now included in 93% of transactions. M&A deal points tend to evolve gradually, and slowly; in relative terms, increased inclusion of materiality scrapes in M&A purchase agreements reflects one of the most dramatic trends covered by the ABA studies.

Sometimes, buyers and sellers adopt a “compromise” position as to materiality scrapes whereby materiality is not disregarded (i.e., is not scraped) when determining whether a breach has occurred; but is disregarded (i.e., is scraped) in determining the losses or damages resulting from that breach (i.e., damages are not limited to whether or not they were material). Such a compromise provision might read along the following lines: “For the purpose solely of determining indemnified Losses, but not for the purpose of determining whether a breach of a representation or warranty shall have occurred, any materiality or Material Adverse Effect qualifiers or references in the Seller's representations and warranties shall be disregarded.” This approach seems to have fallen into relative disfavor, and is currently seen in only about 25% of reported transactions.

In terms of apportioning responsibility for a target company's liabilities as between buyer and seller in an M&A transaction, a “materiality scrape” can be one of the most important provisions within the transaction documents. And yet this provision—and its significance to the overall risk profile of an M&A transaction—is often not fully understood or appreciated.

What is a ‘Materiality Scrape’?
As sellers and buyers negotiate M&A purchase agreements, sellers seek to limit the potential for those representations and warranties to be proven wrong and to result in a buyer claim. One way in which sellers pursue this goal is to narrow the scope of representations and warranties, including by adding materiality, knowledge, or other qualifiers to the relevant language. For example, a representation by the seller that “the target company is not party to any material litigation” is narrower in scope than the same statement without the word “material.” The typical materiality scrape provision eliminates materiality qualifiers from one or more sections of the purchase agreement.

Using the example above if a purchase agreement contains a materiality scrape, the representation and warranty that states “the target company is not party to any material litigation” would be read, in determining whether a breach of that representation and warranty has occurred for indemnification purposes, as “the target company is not party to any litigation.” In other words, the statement is read as if the word material was never included in the first place—the materiality qualifier otherwise applicable to the representation is “scraped” away.

The qualifiers most commonly subject to a scrape are materiality and material adverse effect (MAE). Occasionally though rarely seen is a “knowledge scrape,” which eliminates knowledge qualifiers from representations and warranties (or covenants).

Implementation
Materiality scrapes are generally either embedded within the indemnification provisions of the purchase agreement or set forth as a standalone provision. The following (with italics added for emphasis) is an example of an embedded materiality scrape provision:

The Buyer's Position
The buyer's arguments for requesting a materiality scrape provision generally take the form of one or more of the following:

Fill the Indemnity Basket. A typical purchase agreement contains a “basket,” which is intended to provide the seller (as the indemnifying party) protection from general indemnity claims below a certain negotiated amount. Thus, the basket protects the seller against “immaterial” claims. However, materiality or MAE qualifiers throughout the representations and warranties arguably create a “double materiality” threshold for the buyer to “fill the basket” before indemnity is triggered.

Consequently, absent a materiality scrape, the buyer could incur many losses as the result of unrelated breaches of the seller's representations and warranties that are not individually material but are material in the aggregate, and such losses would not count toward the basket. Where agreements also have, in addition to a basket, a “de minimis threshold” (often called a “mini-basket”)—i.e., claims of less than $X are not covered by indemnification nor counted towards the basket—the buyer can argue that the absence of a materiality scrape creates a “triple materiality” threshold.

“Close and Sue.” If a materiality scrape eliminates materiality and MAE qualifiers from determining existence of a breach but not from determining whether closing conditions have been satisfied, the effect is that a seller can be forced to close “into a breach” and be held accountable immediately after closing for that breach.

“Nickeling and Diming.” The buyer should absorb some level of risk of loss in connection with the acquisition of a business, and a materiality scrape allows or even encourages buyers to hunt for any claim, no matter how minor, to pursue against the seller.

Common Compromises
Some possible compromises to deal with the different perspectives of the seller and buyer include the following ways to lessen the impact of a materiality scrape:

Every other year since 2005 the American Bar Association has released the ABA studies. The ABA studies examine publicly available purchase agreements of transactions involving private companies. These transactions range in size but are generally considered as within the “middle market” for M&A transactions; the median transaction value within the 2019 study was $145 million.

The ABA studies show a relatively steady increase in the presence of materiality scrape provisions from 2004 through the last study. Most private company M&A deal points have relatively stable usage and trends in any direction usually are slow and incremental, particularly if relating to a deal point that has meaningful impact on risk allocation as between buyer and seller. The shift in practice norms for materiality scrapes over the 14+ years covered by the ABA studies is, in that context, therefore remarkable. 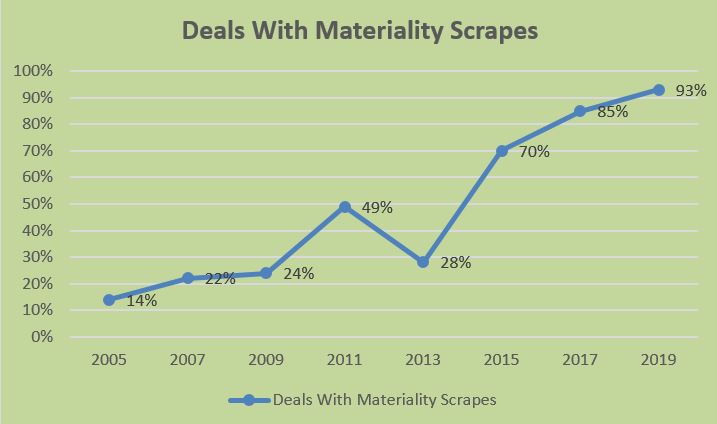 As indicated above, a somewhat compromise position between buyer and seller is to allow for a single materiality scrape. Using the litigation representation example, above, that “the target company is not party to any material litigation,” this compromise position would mean that: (a) materiality would not be scraped in determining whether a breach had occurred, so that non-material litigation would not trigger a breach; but (b) materiality would be scraped in determining the losses or damages resulting from that breach (i.e., damages would not be limited to whether or not they were material). 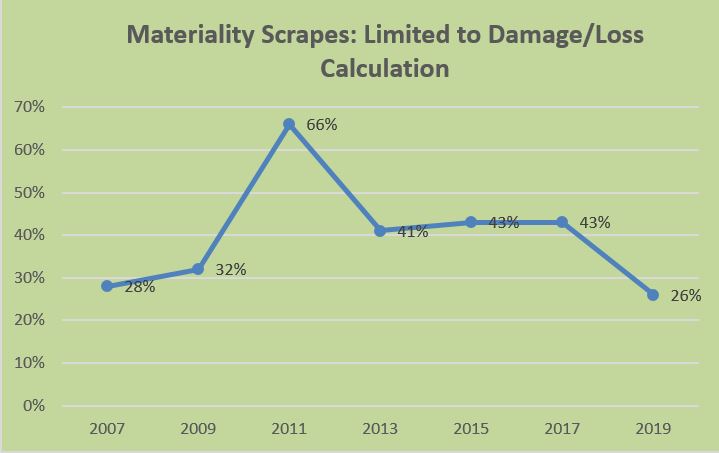 Conclusion
The materiality scrape is here to stay and, as the ABA studies indicate, has, in one form or another, become almost universally present in private company M&A transactions. Of course, as with any substantive provision in an M&A agreement, inclusion of a materiality scrape depends on how the provision fits with the overall allocation of risk between buyer and seller, the attractiveness of economic or other substantive terms, and the relative negotiating strength of the parties. A materiality scrape packs a lot of punch within a relatively small amount of wording, and practitioners should carefully consider the impact and operation of such a provision within their deal documents.

Sign up to receive the latest posts on What's Market? in your inbox!