Published by Bloomberg Law
by Daniel R. Avery on September 20, 2022
Share This:

“Sandbagging” concepts are often the subject of intense negotiation in M&A transactions. Inclusion of pro-sandbagging clauses within M&A purchase agreements has been on the decline, and more often, the parties are deciding instead to be silent on the issue of sandbagging.

As a result of the overall decrease in sandbagging provisions, deals silent on sandbagging jumped from a low of 39% in the 2005 study to a current high of 68% in the 2021 study.

In other words, even if the buyer was aware of an issue prior to closing—whether it be the target's non-compliance with applicable laws, a breach of a customer contract, or other breach of a representation, warranty, or covenant—it could decide to complete the acquisition, and subsequently make claim against, or “sandbag,” the seller under the agreement. An “anti-sandbagging” provision, as the name suggests, prohibits the buyer from sandbagging or seeking post-closing recourse regarding matters which the buyer knew about at or prior to closing.

A typical pro-sandbagging provision may state:

A typical anti-sandbagging provision may state:

The Purchaser acknowledges that it has had the opportunity to conduct due diligence and investigation with respect to the Company, and in no event shall the Seller have any liability to the Purchaser with respect to a breach of representation, warranty or covenant under this Agreement to the extent that the Purchaser knew of such breach as of the Closing Date.

Eliminates Post-Closing Disputes about Knowledge. An anti-sandbagging provision creates an additional hurdle, and potential dispute, for every indemnity claim—i.e., before the parties can even reach the merits of the claim, the issue of the buyer's knowledge or lack thereof would need to be resolved. This can be particularly difficult if knowledge is defined or construed to include any type of constructive knowledge on the part of the buyer, in addition to actual knowledge.

Additionally, there may be disagreement over which of the buyer's executives or employees are included in the knowledge pool and for what purposes—e.g., should an environmental specialist be charged with knowledge about intellectual property issues?; or what type of disclosure establishes knowledge—e.g., does a passing comment by the company's president about an employment issue as the buyer's team is rushing to grab a taxi after a full day's negotiation impart knowledge of that issue?

Disincentive For the Buyer to Conduct Proper Diligence. Eliminating or impairing the buyer's ability to assert claims that the buyer or its representatives were aware of at or prior to the closing, incentivizes the buyer to not fully diligence potential risk areas to avoid obtaining knowledge of potential problems. On the contrary, permitting sandbagging incentivizes the buyer to conduct full and robust diligence, which is in the interest of both sides.

Seller Disclosures Should Be Used to Impart Knowledge. The appropriate way to charge the buyer with knowledge so as to prohibit a claim is to affirmatively disclose the issue within the seller's disclosure schedules. Unless the buyer and seller otherwise agree, which they are free to do, and assuming the disclosure adequately describes the matter as an exception to the appropriate representation or warranty, the buyer would generally not have recourse with respect to facts or circumstances disclosed in the disclosure schedules.

Additionally, buyers often argue that it is not in their interest to close and sue on a breach. Rather, it is to the advantage of both parties for the buyer to resolve all outstanding issues, to the extent possible, prior to closing.

Sellers generally have a different perspective on sandbagging and anti-sandbagging provisions, which may include:

Close and Sue. From the seller's perspective, it is unfair for the seller to “open its files” to a buyer for a full due diligence exercise, to later have that buyer withhold information about a problem that the buyer discovered through its diligence, acquire the business, and sue after the fact to adjust the purchase price through a damages claim. This is often presented as an argument of “fairness” in favor of a no-sandbag clause: why should a seller be forthcoming with information if the buyer is not similarly forthcoming about whether it has information supporting a claim against the seller as a result of that disclosed information?

Facilitates Collaborative Disclosures. An anti-sandbagging clause helps ensure that if the buyer learns of a potential problem during its diligence, it raises the issue with the seller before closing. Raising issues prior to closing helps facilitate full and responsive disclosure as well as discussions about how to resolve the buyers concerns.

For example, if the buyer uncovers a potential area of litigation or regulatory risk in its diligence, the seller and buyer could jointly determine the level of risk, whether or not that risk was insured or insurable, and how the residual risk should be allocated as between buyer and seller—e.g., through a specific special indemnity subject to caps and time periods tailored to that risk.

Results Where the Agreement Is Silent on Sandbagging

As noted below, M&A agreements are increasingly silent on sandbagging—i.e., the agreement neither expressly allows nor prohibits sandbagging. In such situations, the state law governing the agreement determines whether silence on the topic either permits or disallows sandbagging.

A short review of the status of New York law, one of the top controlling law choices in M&A agreements, is instructive. Under New York law, in the absence of an express preservation of the buyer's rights, the issue hinges on whether or not the buyer believed it was “purchasing the promise as to the truth” of the relevant warranties. CBS Inc. v. Ziff-Davis Publishing Co. et. al, 553 N.E.2d 997 (1990), established the general rule in New York, which was expanded and clarified in later cases.

In the M&A agreement at issue in Ziff-Davis, the seller warranted as to the accuracy of certain financials that the buyer questioned, after the signing of the agreement but prior to the closing, based on its own diligence. The seller said that there was “no merit” to the buyer's position, and the buyer agreed to close “on a mutual understanding that the decision to close, and the closing, [would] not constitute a waiver of any rights or defenses either [party] may have.” After closing, the buyer sued, claiming that the seller had breached its warranties with respect to the profitability of the businesses acquired.

Later cases in New York expanded on the finding in Ziff-Davis, focusing on when a buyer is purchasing the promise as to the truth of a warranty. In Galli v. Metz, 973 F.2d 145 (2d Cir. 1992), the court stated that:

where a buyer closes on a contract in the full knowledge and acceptance of facts disclosed by the seller which would constitute a breach of warranty under the terms of the contract, the buyer should be foreclosed from later asserting the breach. In that situation, unless that buyer expressly preserves his rights under the warranties (as CBS did in Ziff-Davis), we think the buyer has waived the breach.

The main point of the Galli court was that if the seller discloses a problem, the buyer should be precluded from making a post-closing claim because, given the seller's disclosure, the buyer cannot then claim it was purchasing the truth of that warranty. However, the Galli court did note that if a third party discloses the information or if the information in question is common knowledge, the buyer would have a stronger argument.

The same court, dealing with the sale of goods under the UCC but citing Ziff-Davis, concurred that the source of the information is relevant, stating that “what the buyer knew and ... whether he got that knowledge from the seller are the critical questions.” Rogath v. Siebenmann, 129 F.3d 261, 265 (2d Cir. 1997).

The New York cases illustrate the difficulty and uncertainty of potential litigation regarding a breached representation or warranty, especially when an M&A agreement is silent on the issue of sandbagging. Further, the New York cases do not address all the potential issues that may arise in such litigation. For example, if one sentence in one document hidden among boxes full of documents provided to the buyer disclosed information that a warranty might not be true, but the buyer did not come across that sentence, did the buyer know that the warranty was not true and did the seller make the disclosure?

In reviewing how sandbagging has been addressed in M&A transactions throughout the 15+ year coverage period of the ABA studies, reasonably clear trend lines emerge.

In contrast, deals silent on sandbagging jumped from a low of 39% in the 2005 study to a current high of 68% in the 2021 study. The inverse correlation between these two points is not surprising given that the number of anti-sandbagging provisions reported in the ABA studies remained relatively steady between 2005 and 2021, ranging from 2% to 10%.

The chart below reflects how these trends are shown in the American Bar Associations eight M&A deal points studies since 2005. 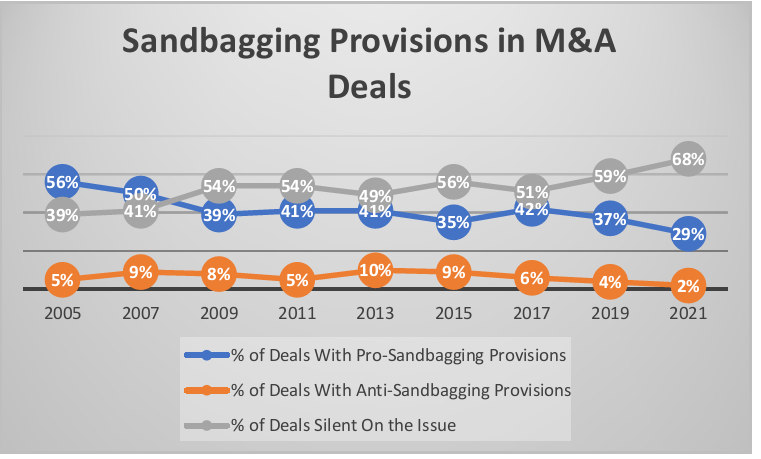